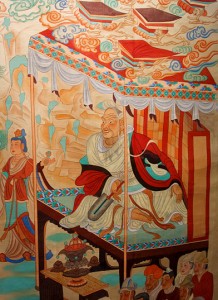 Vimalakirti was a lay trainee with a
family during the time of Shakyamuni
Buddha. He was known to be highly
enlightened, and he gave many talks
on the Dharma. The Vimalakirti
Scripture contains these talks.

Periodically we send out an email in which Rev. Master Basil gives a brief update on the group and then goes over some aspects of the Dharma.  If you would like to be included on our email list then please send your email address to seattledharmarefuge@gmail.com with your request to join.

Below is an archive of previous emails:

December 2021 – Reunion with the Eternal / The Kyojukaimon

September 2021 – The Practice Helps Us

April 2021 – Mindfulness and the Egocentric Self

December 2016: The Precepts, Kyojukaimon and Commentary

December 2015: The Skandhas/ Training with the Self, part 4

February 2014: Training with Fear and Terror

February 2013: Gratitude and Turning to Something Deeper/ Ian Training in the Hospice

January 2013: The Purpose of Meditation is to Help Us

November 2012: Refuge in the Unborn

May 2012: Keeping Ourselves Free from the Clutter of Bigotry and Theories